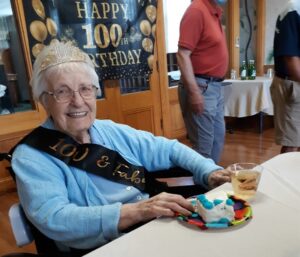 May 13th, Sister Adrienne deChamplain celebrated her 100th birthday, and it was quite a day!  In the morning, residents at Marian Manor celebrated this milestone with her and that afternoon Sr. Bernadette Sullivan, Sr. Carol Regan, and Sr. Joan Guertin joined several of Sr. Adrienne’s nieces, nephews, and the mayor of Taunton in another joy-filled gathering.  Mayor Sheila O’Connell issued an official proclamation from the City of Taunton, extending the city’s “heartiest congratulations and its best wishes!”

Staff at Marian Manor told us that Adrienne had received “piles” of birthday cards all week long and that her room was filled with them. Thank you so much for honoring our province’s oldest sister; she is well, peaceful, and grateful to all of you for your prayer and affection.  Congratulations Sr. Adrienne on this extraordinary milestone!

Click the pictures below to see them full sized 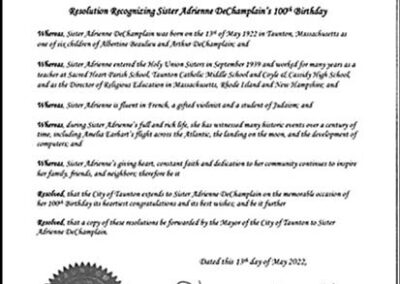 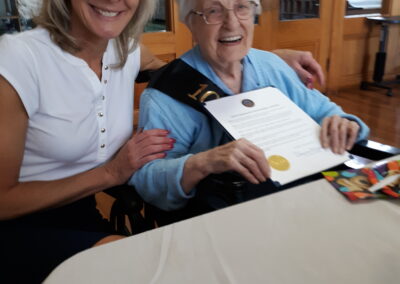