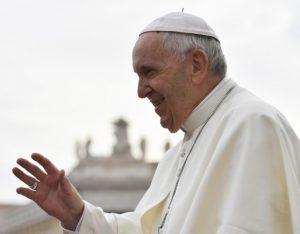 For the 53 World Day of Prayer for Peace, Pope Francis has chosen the theme: PEACE AS A JOURNEY OF HOPE: DIALOGUE, RECONCILIATION AND ECOLOGICAL CONVERSION
In his message for January 1, he ties together his frequent call for global nuclear disarmament with his pleas for a more just economic system and better protection of the environment and natural resources. Mentioning his recent trip to Japan, where he visited the nuclear-bombed cities of Hiroshima and Nagasaki, Francis warns that world powers seek to create “a false sense of security sustained by a mentality of fear and mistrust.” “Mistrust and fear weaken relationships and increase the risk of violence, creating a vicious circle that can never lead to a relationship of peace,”
Francis cites the recent Synod on the Amazon and urges “a pressing renewed call for a peaceful relationship between communities and the land…” You can read Pope Francis’ message for the World Day of Peace by clicking here. JAN. 1 MESSAGE POPE FRANCIS
Background
On December 8, 1967, Pope Paul VI established a World Day of Peace as a feast of the Roman Catholic Church. Held on January 1, the Solemnity of Mary, Mother of God, it was inspired by the encyclicals, “Pacem in Terris”; and “Populorum Progressio.”
On December 17, 1969, the United Nations General Assembly proclaimed January 1 as the official International Day of Peace.
“The world must be educated to love Peace, to build it up and defend it.”
— Pope Paul VI, 1968