Juneteenth is now a National Holiday 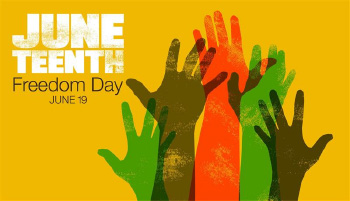 This is the second year that Juneteenth will be recognized as a national holiday. Many of us don’t have a lot of history recognizing this important holiday, so here is a brief history, as well as a few links for you to go deeper and learn more. Juneteenth has been an important holiday for African Americans for over 150 years; it’s time for everyone in the United States to seek deeper reverence for this day.
Thanks to the Sisters of Mercy Justice Team for these resources.
On June 19, 1865, Union General Gordon Granger and his troops arrived in Galveston, Texas, to announce the emancipation of all enslaved people. The event took place more than two years after President Abraham Lincoln issued the Emancipation Proclamation and two months after the April surrender of Confederate Gen. Robert E. Lee to Union forces. This is what became known as Juneteenth: a holiday, long celebrated in many African American communities, that takes place every year to commemorate the abolition of slavery in Texas and the other Confederate States of America.
On June 17, 2021, the Juneteenth National Independence Day Act was signed into law. Juneteenth, also known as Jubilee Day, Emancipation Day, and Black Independence Day, became designated a federal holiday in the United States to commemorate the emancipation of enslaved African Americans.
Much of the efforts to accomplish this federal designation must be attributed to the decades of work of one woman, 95-year-old Opal Lee, known as the “grandmother of Juneteenth. “St the age of 89, … she decided her new life mission was, “… to spread the word about Juneteenth to everybody.”…[s]he decided to start with a walking campaign in cities along a route from her home in Fort Worth, Texas, to Washington, D.C. …Over several weeks, Lee arrived in cities where she’d been invited to speak and walked 2½ miles to symbolize the 2½ years that it took for enslaved people in Texas to learn they were free.” Lee never gave up and was present on June 17, 2021, for signing Juneteenth into law.
Lee’s endurance is symbolic of the history of a people who never gave up hope, even when facing uncertain times. Generations of African Americans will remain forever grateful for her efforts.
RESOURCES:
To learn more about Juneteenth, visit these websites.
National Museum of African American History & Culture
Juneteenth: What You Need to Know Video
The history behind Juneteenth and why it resonates today (HR 40) Washington Post