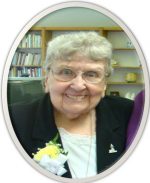 Sr. Lorraine MacPhersonSister Lorraine MacPherson (Sr. Therese Joseph) SUSC of Jeanne Jugan Residence, Pawtucket, RI died after a brief illness on January 8, 2018 at the age of 90. She was born in Lynn, MA April 22, 1927, daughter of the late Robert and Ida (Gaudet) MacPherson. In addition to her Holy Union Sisters, her sister-in-law, Lorraine MacPherson, a niece and nephew and grandniece and grandnephew survive her. Her brother, Robert, predeceased her.

Sr. Lorraine studied at Sacred Heart Teacher Training School in Groton, MA and received a Bachelor of Science in Education degree from Catholic Teachers’ College, Providence, RI. She received a Master of Arts in Teaching degree from St.. Michael College, Winooski, VT. She did additional studies in religious education at Emmanuel College and Cardinal Stritch College.

Sister Lorraine taught in elementary schools in Massachusetts and Rhode Island from 1952 to 1970. After completing studies in religious education, she became coordinator of religious education programs in several parishes in Central Falls and Pawtucket from 1972 to 1997. In 1997 she became a pastoral bereavement minister at Keefe Funeral Home, Lincoln, RI. Sr. Lorraine moved to Forand Manor in Central Falls in 2004 and continued to volunteer as bereavement minister. At Forand Manor she brought communion to housebound residents and led the rosary. Ill health necessitated her move to Jeanne Jugan Residence in Pawtucket in April 2016. There she visited other residents and prayed with them.

In 2014 on the occasion of her 65th anniversary as a Holy Union Sister, the Rhode Island State Senate honored Sr. Lorraine. A proclamation was read noting her contribution to the Central Falls community where she had ministered for many years.
All funeral arrangements took place at Jeanne Jugan Residence, 964 Main Street, Pawtucket. The wake was January 11 from 4-7 p.m. and January 12 at 9 a.m. The Memorial Prayer was at 10 a.m. and the Mass of Christian Burial at 11 a.m. Burial at St. Francis Cemetery, Pawtucket followed. Funeral Arrangements are by Keefe Funeral Home, Lincoln, RI.

Article 62 of the Holy Union Sisters’ Constitution states that
“… our participation in the Community mission lasts all through life.”
Sister Lorraine embodied this article throughout her long religious life.
Along with the many persons who lives she touched, the Holy Union Sisters rejoice that she is now enjoying the fruits of her labors.