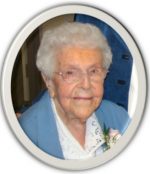 Sister Alice graduated from St. Cecilia High School, Pawtucket. She entered the Holy Union Sisters on January 23,1937, and pronounced her final vows on August 15, 1944. She attended Sacred Heart School of Education and received a Bachelor of Science in Education degree from Catholic Teachers College, Providence, RI.

Her former students remembered Sister Alice fondly and many visited her regularly long after she left teaching. She was noted for her knitting and crocheting skills.
Countless babies wore the blanket sets she lovingly crafted. Not wanting to take credit personally, she included this card in the box with each gift.