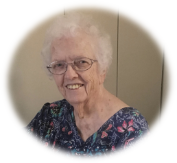 Sister Antoinette Ouellette SUSC died August 17 at Holy Family Hospital, Methuen MA after a brief illness. Born in Lawrence on June 30, 1927, she was the daughter of the late John and Irene (Martin) Ouellette. In addition to her Holy Union Sisters, nieces, nephews, grandnieces, and grandnephews survive her. She was predeceased by her sister Theresa Wrigley and brothers John and Henry.
Sr. Toni, as she was known to all, graduated from Sacred Heart High School, Lawrence and entered the Holy Union Sisters on August 15, 1945. She pronounced her final vows on August 22, 1953. She received a B.S. in Education from Catholic Teacher’s College, Providence, RI and spent her early years as a junior high school teacher in Holy Union schools in Maryland, New York, and North Carolina. She also served as principal and superior in Baltimore and Elizabeth City, North Carolina.
In 1961 Sr. Toni went to the Holy Union Mission in Cameroon, where she fulfilled a long-time desire to minister in the foreign missions. Her first ministry there was as a science teacher and superior of the local community in Nkongsamba. She then served as Superior of the Cameroon Region.
In 1980, she returned to the United States to pursue a nursing degree at Bristol Community College, Fall River, MA. When Sr. Toni returned to Cameroon as a registered nurse, she worked among the Baka people in Moloundou in southeastern Cameroon for eight years. She was remembered fondly by her students and colleagues who remained in contact with her long after she left Cameroon.
In 1992 she left Cameroon and joined the nursing staff at the Holy Union Sisters retirement home in Fall River and was also assistant to the administrator. She retired in 2005 and moved to Prosper Care, formerly The Landmark in Fall River. In 2013 ill health necessitated a move to Mary Immaculate Residence, Lawrence, where she resided until her death. In 2020 Sr. Toni celebrated her seventy fifth anniversary as a Holy Union Sister.Sr. Toni’s vigil and Mass of Christian Burial took place at St. William Church, Tewksbury, MA. Burial followed at Sacred Heart Cemetery, Andover.
Donations in Sr. Toni’s memory may be made to:
Holy Union Sisters Mission Advancement Office
P.O. Box 410 Milton, MA 02186.

Sister Toni’s openness to the people of Cameroon whom she served
with great joy for many years enriched her greatly.
We are comforted in the sure knowledge that after a long life,
she now enjoys the fruits of her labors forever.
You can download Sr. Toni’s biography here. Biography Sr. A Ouellette WEB