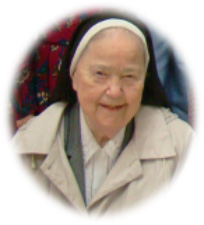 Sister Beatrice Gerard Bouvier SUSC died November 28th at the Saab Residence, Lowell, MA. Born in Pawtucket, RI on June 22, 1927, she was the daughter of the late Albert and Rosealba (Audet) Bouvier. In addition to her Holy Union Sisters, nieces, nephews, grandnieces and grandnephews survive her. She was predeceased by her sisters Helen Boissy, Rita Bouvier and brothers Alfred and Gerard.
Sr. Beatrice Gerard graduated from St. John the Baptist High School, Pawtucket. She entered the Holy Union Sisters on December 8, 1946 and pronounced her final vows on July 26, 1954. She received a Bachelor of Science Degree in Education from Catholic Teachers College, Providence and a Master of Arts Degree in Business Education from Catholic University, Washington. Sr. Beatrice Gerard taught for nearly thirty years, mainly as a business education teacher in Holy Union High Schools in Massachusetts and Rhode Island.
In 1978 she began a long career as secretary and treasurer for the former Groton Province of the Holy Union Sisters until her retirement in 1999. During these years she also served as treasurer and accountant for The Lighthouse School first in Lowell and later in Chelmsford, MA. Until recently she continued to perform secretarial and financial duties there. From 1988 to 1994 she also served as treasurer for the United States Province of the Religious of Christian Education. Sr. Beatrice Gerard attended international meetings of treasurers and served as a delegate to General Chapters of the Holy Union Sisters. She was a member of the Finance Board of the United States Province. In 2016 she celebrated her seventieth anniversary as a Holy Union Sister.
During her years as province secretary and treasurer, “B.G.” as she was known to all, carried out her duties with great care and attention. Her years as a business education teacher served as a good foundation for her province ministry. She was always ready to assist sisters with any requests or concerns they brought to her. As her financial duties grew, “B.G.” took courses and attended workshops that enabled her to keep up to date. She took great pride in her involvement with The Lighthouse School which had begun in 1967 as The Holy Union School to serve special needs students in the Lowell area. Administrators and staff expressed their gratitude for her presence which they regarded as a continuation of the school’s Holy Union origins.
Sr. Beatrice Gerard’s Mass of Christian Burial was at St. William Church, Tewskbury on December 2 at 10:30AM. Burial was at Notre Dame Cemetery, Pawtucket, RI. on Thursday, December 3rd. Funeral arrangements were under the direction of McGaffigan Funeral Home, Pepperell MA.
Donations in Sr. Beatrice Gerard’s memory may be made to the Holy Union Sisters Mission Advancement Office, P.O. BOX 410, MILTON, MA 02186.

After a long period of failing health, Sister Beatrice Gerard died peacefully
on the last day of the Church year.
As the new year began on the first Sunday of Advent,
she accepted the master’s invitation
to the good and faithful servant, “Come and join in my happiness!”