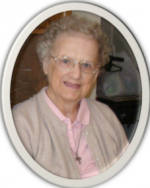 Sister Claire was educated in Catholic schools in Sanford Maine and entered the Holy Union Sisters on September 8, 1948. Throughout her religious life, she served the community in food service in convents in Massachusetts and Rhode Island. In 1984 she joined the retirement community at St. Mary’s Villa, Lowell, MA and was in charge of the food services there. At St. Mary’s she also served as community organist.

Although born and raised in Maine and educated by the Ursuline Sisters, Sr. Claire’s ties to Holy Union were very strong. Her mother was a native of Lawrence, MA where the Holy Union Sisters had taught at Sacred Heart School since 1905. Her mother’s sister was Sr. Marie Celine who became her novice mistress when she chose to enter Holy Union. Sr. Eva Ouellette was her first cousin. The Bergeron family had two religious in the family, Bertha who entered the Ursuline Sisters and Claire who became a Holy Union Sister.

In 2006 she retired to Mary Immaculate Residence in Lawrence, MA where she had time to pursue her life-long love of music. She had an electric organ in her apartment and this gave her great pleasure. For her first email account, she chose “songbird.susc” as her username. When the sisters gathered each year to celebrate Christmas, Sr. Claire played French and English carols and the community sang along. A highlight of these celebrations was the French meat pies that Sr. Claire lovingly prepared. On September 8thshe celebrated her seventieth anniversary as a Holy Union Sister. Because of her recent decline in health, she moved to the Nursing/ Restorative Center at Mary Immaculate.