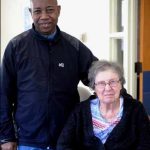 Fall River Herald News reporter, Deborah Allard recently interviewed Sr. Eleanor McNally. Here is an excerpt of the interview.
Tanzania is a long way from Catholic Memorial Home, but the bond shared between a local sister and a humanitarian has brought the pair together once again. Christian Shembilu traveled from Africa recently to visit Sister Eleanor McNally, 86, who now resides at Catholic Memorial Home. “Christian and I worked together for a long, long time,” McNally said. She started the Caritas Dar es Salaam Office in the 1980s and recruited Shembilu into the program in 1984. “I was one of the first,” Shembilu said. “She was my mentor, my trainer.”  Today, Shembilu heads the program. The two created educational and training programs that exist to this day to empower women in the community. “When you help women, you help the family,” Shembilu said. “We concentrate on poor communities.” Women are taught how to manage finances and start a micro-business, so they can move themselves and their families into a better situation. Other programs focus on sustainable agriculture. “That’s what our program was all about, helping people help themselves,” McNally said.
Shembilu agreed. He said a welfare-type program didn’t really help people to change their lives for the better. “It is better to teach people how to solve their own problems.”  While in Tanzania, McNally learned Swahili — the national language — and is still fluent, as illustrated by the two sharing a few words at Catholic Memorial Home.
For McNally, a city native, working in Africa was something she wanted to do for years after becoming a Holy Union Sister. But first she went to Vietnam during the war. She lived in Saigon where she worked for Catholic Relief Services setting up programs to serve orphaned children. She found the Vietnamese very kind and friendly, and never felt she was in any danger. “We had to leave when the North took over.” After waiting for hours, McNally was the last nun to leave Saigon. She was accompanied by Vietnamese co-workers seeking refuge in America. “American planes took us out,” she said.
Shembilu said he hadn’t spoken to McNally for some time and after sending several emails that went unanswered, “I was worried about her,” Shembilu said. So, he contacted her family and decided to visit. While in the Fall River area, he’s  spending time with her brother and sister-in-law, who traveled to Tanzania for years as mission workers. He also visited those involved in Missions for Humanity.