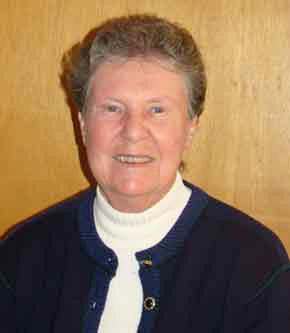 Sister Eleanor McNally SUSC died December 13 at Catholic Memorial Home at the age of eighty-seven. Born in Fall River MA on September 21, 1932, she was the daughter of the late Bartholomew and Eunice (Whittaker) McNally. In addition to her Holy Union Sisters, her sister Janet (McNally) Kinnane and brothers William and Brian, sisters-in-law, Mary McNally, Mary C. McNally and Norma McNally as well as many nieces, nephews, grandnieces, grandnephews and great grandnieces and great grandnephews survive her. She was predeceased by her brother Bartley and sister-in-law Ida McNally.
A graduate of Sacred Hearts Academy, Sr. Eleanor worked for several years in Boston before entering the Holy Union Sisters on September 8, 1959 and pronounced her final vows on August 22, 1967. She received a Bachelor of Arts Degree in Education from the College of the Sacred Hearts and taught junior high school classes in Massachusetts, New York, New Jersey and Pennsylvania for eight years before pursuing her lifelong dream of going to Africa. She prepared by studying missiology at St. Paul’s University, Ottawa and St. Francis Xavier University, Nova Scotia.
Sr. Eleanor worked for a short time in Cameroon and returned to the United States where she served as liaison with the New York City Board of Education for Catholic Schools of the New York Archdiocese. In 1974 she joined Catholic Relief Services and administered a U.S. government-funded orphanage improvement program throughout South Vietnam until the fall of the country in 1975 when along with all other Americans she was evacuated to the United States. Because of her experience she was asked to establish the Vietnamese Resettlement Program for the New York Archdiocese. In 1976 she became personnel director for the Holy Union Sisters but her desire to return to Africa remained. In 1979 she joined the Maryknoll Sisters’ Associate Program and was missioned to Dar es Salaam, Tanzania where she became director of the Diocesan Caritas Office. In 1989 she returned to the United States and established the development office for the Holy Union Sisters.
In 1994 again under the auspices of Catholic Relief Services, she worked in the resettlement of Rwandan refugees on the northwest border of Tanzania. She returned to Dar es Salaam where she assisted the Caritas Office which now had an entirely Tanzanian staff. She also worked with a youth group who had initially come to the Caritas Office for assistance. In 2005 believing that she had fulfilled her mission among the Tanzanian people she returned permanently to the United States.
Sr. Eleanor volunteered at STARR Treatment Center in Fall River and was active in the Task Force on Violence Against Women. She also worked to educate the Holy Union Sisters on the issue of Human Trafficking, especially of women and children. In 2015 she joined the Holy Union Sisters Community at The Landmark, Fall River until ill health necessitated a move to Catholic Memorial Home in 2018.
The wake was December 20th at Waring-Sullivan Home, 178 Winter St. from 2 to 5 p.m. with a Prayer Service at 3 p.m. The Mass of Christian Burial was December 21 at 10 a.m. preceded by visitation at 9 a.m. Burial in St. Patrick’s Cemetery followed. All arrangements were by Waring-Sullivan Home. Donations in Sr. Eleanor’s memory may be made to Holy Union Sisters Mission Advancement Office, P.O. Box 410, Milton, MA 02186.

We can be consoled in the sure knowledge that this woman of strong faith and courage now rests eternally in the arms of the God who was the guide of her life. In these Advent days, readings from the prophet Isaiah accompany us. Eleanor lived fully Isaiah’s invitation:
“Widen the space of your tent,
extend the curtains of your home,
do not hold back.”