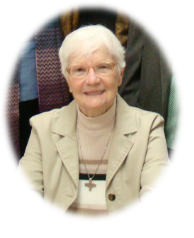 Sister Rita Beaudoin SUSC (Sr. Ruth Elizabeth) died peacefully on the evening of January 18 at Mary Immaculate Nursing/ Restorative Center, Lawrence at the age of ninety-five. Born in Lawrence, MA on March 16, 1927, she was the daughter of the late Henry and Eva (Bertrand) Beaudoin and is survived by her Holy Union Sisters. Her only sibling, Sister Ruth Beaudoin SUSC died in November 2022.
Sr. Rita graduated from Sacred Heart High School in Lawrence. She entered the Holy Union Sisters on December 8, 1946 and pronounced her final vows on July 26, 1954. She earned a B.A. and M.A. in English from Boston College.
Sr. Rita’s first teaching assignment was at St. Anthony School in Shirley, MA, where in addition to teaching middle grades, she was also the church organist. The remainder of her teaching career was on the high school level, first at Sacred Heart High School, Lawrence and then at Rose Hawthorne High School, Concord, where she also served as principal. She taught at St. John the Baptist High School in Pawtucket, RI, and was principal at Assumption School in Chelsea.
Sr. Rita was a member of the General Council of the Holy Union Sisters in Rome for six years. When she returned to the United States she became the assistant administrator at St. Mary’s Villa, Lowell, the retirement community of the Groton Province. She then served as provincial superior. When she completed her term, she participated in a renewal program at St. Stephen’s Priory, Dover MA. Sr. Rita established the Development Office for the Groton Province in the early 1990s and later served as Province Archivist. When the two United States Provinces became one entity in 1999, she continued as archivist and was an active member of several organizations for archives of religious collections.
Sr. Rita retired to Mary Immaculate Residence in 2012 and recently moved to the Nursing/Restorative Center because of declining health. Donations in Sr. Rita’s memory may be made to the Holy Union Sisters Mission Advancement Office, 205 Bedford Street, Fall River, MA 02720.
Rita possessed many talents and gifts: linguist, musician, teacher, archivist. She was fluent in French and served as a translator for international Holy Union meetings. She enlivened many gatherings of sisters with her piano playing. She made a lasting impression on her beloved students from Rose Hawthorne High School, who remained in touch with her for over sixty years. Rita was a devoted and faithful companion to her sister Ruth throughout their long religious lives until Ruth’s death in November 2022. Rita’s study and work with the archives of both the Congregation and Holy Union in the United States have bequeathed a legacy to all with whom she so enthusiastically shared her knowledge, including Holy Union Sisters and Associates. As Mission Advancement Director for the Country Day School of the Holy Union, she offered lively and engaging presentations to the students, faculty, and board. Even at the age of ninety-five, she continued to be interested in and engaged in the activities of the Congregation as well as her own United States Province.

As we bid farewell to Rita after more than seventy-five years as a faithful Holy Union Sister,
we join our prayer with that of Simeon in the Temple:
“Lord, may your servant go in peace.”