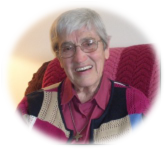 Sister Ruth Beaudoin SUSC (Sr. Maria Henry) died November 12th at Mary Immaculate Nursing/Restorative Center, Lawrence at the age of ninety-four. Born in Lawrence on May 3, 1928, she was the daughter of the late Henry and Eva (Bertrand) Beaudoin.
In addition to her Holy Union Sisters, she is survived by her sister, Sister Rita Beaudoin SUSC. Upon graduating from Sacred Heart High School in Lawrence in 1946, she entered the Holy Union Sisters. She pronounced her final vows on July 26, 1956. In September she celebrated seventy-five years as a Holy Union Sister.
Sr. Ruth received a B. A. in History from Boston College and an M. A. in History from Assumption College, Worcester, MA. She did additional studies at Smith College, Salem State College, St. John’s University in Minnesota, and Webster College in St. Louis. She received an M. A. in Religious Education from Boston College.
During her thirty years in education, Sr. Ruth taught junior and senior high school classes in Cambridge, Concord, and Lawrence. Long after she left the classroom, she was in touch with many of her former students. In 1978 she became a religious education coordinator initially in her home parish of Sacred Heart, Lawrence. She spent a year in Rome as part of an international commission which worked on the revision of the Holy Union Sisters’ Constitutions. Upon returning to the United States, Sr. Ruth resumed her ministry of religious education at Sacred Heart Parish, Groton, MA.
In 1993 Sr. Ruth returned to Rome and was administrator of the Holy Union Sisters Generalate Community for seven years. In 2001 she participated in a year-long sabbatical program at Washington Theological Union. Sr. Ruth then served as administrator and coordinator of the Holy Union Sisters Retirement Community at St. Mary’s Villa in Lowell. She moved to Mary Immaculate Residence in 2006 where she again served as coordinator for the Holy Union Sisters who resided there. Ill health necessitated a move to Marguerite’s House in 2020 and later to the Nursing/Restorative Center of Mary Immaculate Residence.
Sr. Ruth often expressed her gratitude for the international opportunities of service in Holy Union. She generously responded to requests from the General Council to come to Rome, initially on the Commission to revise the Holy Union Constitutions and later to take on
the responsibilities of administrator of the Generalate Community. In this role, she warmly welcomed sisters and family members from all areas of the Congregation. She developed lasting friendships with many of the sisters who came to Rome. She believed these experiences enabled her to develop a vision of the world which transcended the borders of the United States.
Sr. Ruth’s Mass of Christian Burial was held at St. William Church, Tewksbury followed by burial at Saint Bernard Cemetery, Concord. Donations in Sr. Ruth’s memory may be made to the Mission Advancement Office of the Holy Union Sisters, 205 Bedford Street, Fall River, MA 02720.
Sr. Ruth once described her vocation to Holy Union as “a call made to her heart”.
This call led her to respond in ways she could not have imagined when she entered Holy Union.
Her ability to do what was asked of her at different times throughout her religious life was a testament
to her fidelity to this “call made to her heart” in 1946.
You can download a copy of Sr. Ruth’s biography here  Biography Sr. Ruth Beaudoin